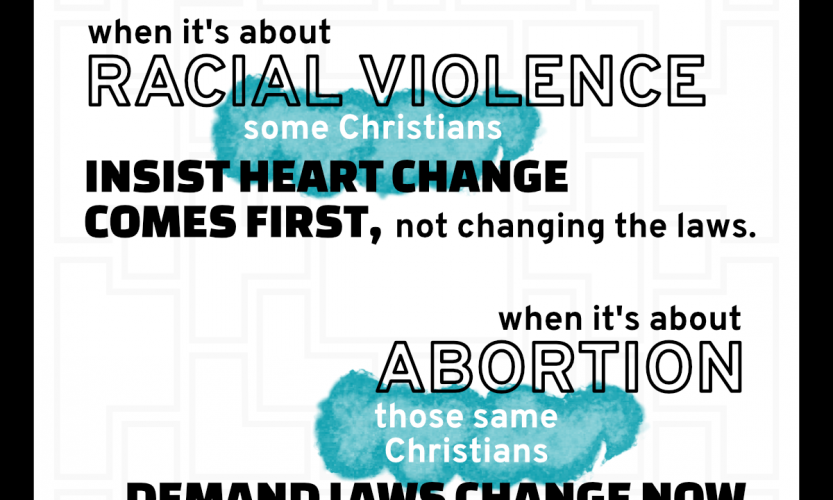 This is a punchy series of graphics designed to highlight hypocritical thinking around Christians and racism. I want to provoke reflection, not create airtight assessments of everything that is amiss in Christian thought.

When it comes to racism and racial justice, there are certain sticking points for white evangelical Christians (in which I was raised) that make it hard for them to engage; namely corporate sin, the systemic nature of racism, and the need for policy change to bring about justice and peace. I’ll just say a few words about each image.

Western thought is very individualistic and therefore our theology tends to focus on individual sin and righteousness. When we speak about the generational and corporate sin of racism, the worldview I was raised with wants to deny that I could ever be complicit or need to take responsibility for what my ancestors did or for what other people are doing to my right and left.

However, time and again, white evangelical leaders blame LGBTQ (and/or abortionists or feminists) for natural disasters, acts of nature (typically hurricanes), and terrorists attacks. So, by their own logic, something they perceive to be a sin that some (but not all) individuals are ‘guilty’ of, becomes a corporate sin because most (but not all) people were complicit? Therefore God would hold all people in that area responsible for some LGBTQ people?

The fact that some can swallow this idea easier than they can the idea that racism is a corporate sin is telling, isn’t it?

I titled this one ‘social justice’ because this double standard of thought is one of the primary things that prevents Christians from engaging in social justice. They just don’t believe racism is embedded into our culture or social systems.

Admittedly, systemic racism was a really hard idea for me to wrap my head around at first. Racists were individuals who were bad and no good person would enforce a racist policy or fail to question and change a racist system. Many times, with white Christians, I see an inability to connect the dots; that everything humans do can be infected by our sin and therefore, racism, as a sin, can infect the policies we create to govern ourselves and the system we created to organize our world.

And yet, there is increasing concern and fear among white Christians that they are being persecuted here in America. An example of that thought process might look like this: “While not all government officials hate Christians, many government policies persecute us. Right now, they are trying to keep us from meeting in our churches! They say it’s because of COVID-19 but really it’s because our nation has turned from God.”

Again, I don’t agree with their assessment of the situation, but I see in their reasoning there is a belief that unjust treatment of a group of people can be perpetuated by a system/policy…not just individual people.

Christians and law and order:

Individualism again. Heart change as the only way to eradicate evil in the world. That is…until we’re talking about people wanting to abort their babies.

White Christians get hung up on not wanting to “get political” when it comes to racism and acts of racial violence. Yet they have no issue with getting political over abortion or reproductive rights.

To be sure, abortion isn’t a matter of politics to them but ‘sanctity of life.’

Why can’t they see that racism and racial violence are not a matter of politics either, but…well, sanctity of life!?

This hypocritical thinking stems back to the politicization of abortion by politicians who were pro-segregation and losing their voters. And it’s worked marvelously for generations as many of my peers will vote for a candidate solely because of their pro-life stance, no matter what else that person believes or does or says.