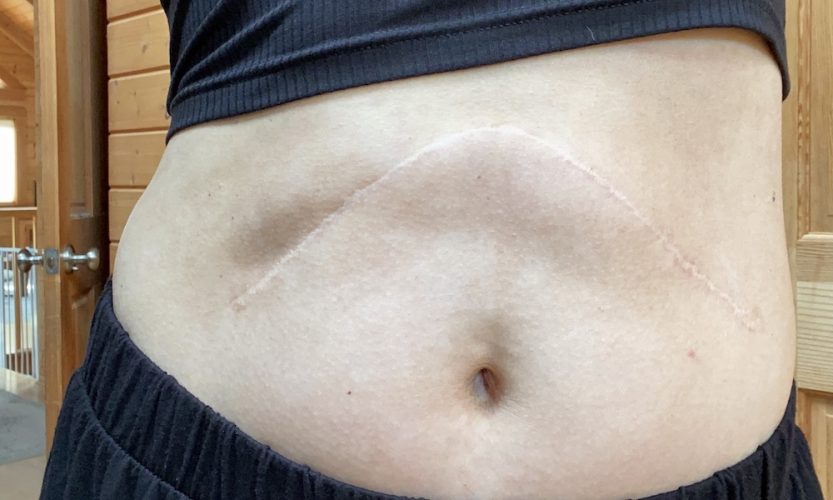 Oh man, it’s been four years. That’s a bit wild. The surgery feels like a distant memory, until I read through my posts and then it all comes back. Those currently researching if they want to donate or not may want to know what it’s (health, life, etc) like 4 years after donating. So here are my updates.

The one lasting side effect.

Aside from the scar itself and the slight rippling of skin around it, the only last side-effect I’m aware of is the numbness of my skin around the center of my belly where the scar is. Those nerve-endings just never quite got back to full sensation afterward. Maybe it would’ve helped if I’d been better about massaging the area during recovery to break up scar tissue. Maybe some of that it to be expected when your abdominal wall is cut through.

Several people have wanted to know if I was able to go back to “normal”. Like, could I still run and lift like I used to and feel like nothing ever happened. The answer to that is…probably?

I didn’t go back to my pre-surgery fitness levels but I don’t think had to do with the transplant at all. I think that had more to do with life circumstances. Two months after the transplant, we added a child to our house. Five months after, my niece came to live with us briefly as well. So transitioning to a toddler, teen and twenty-something in the house was hard. I put some of my self-care on the back burner.

Then, about eight months after, I got pregnant with our second and we moved to our beautiful home in the forest. My abdominal muscles stretched as the baby grew. I continued to confront personal issues related to my adoption which you can read about here. I should have done better with pre-natal exercises but, again, life.

I began the pandemic of 2020 with a lot of in-home stress and relational pain. Between anti-asian hate, my own adoption related trauma, and increasing divides from family and church, I had my first ever panic-attack that March. I started seeing a therapist, over the phone, but I’ve felt like I’m in survival mode ever since.

So I’ve given myself grace in the area of physical fitness. As long as I’m motivated to eat, I don’t stress over the extra treats that make it into my mouth. Occasionally I’ll run and feel like, yeah, I’m out of shape, but my body is capable. I know this is a difficult life season. But I’m confident I’ll find my way back to those things when the time is right and that my body will be able.

My cousin, however, is in tip top shape.

Randy works out almost daily. He’s tapped into my former-fitness-trainer knowledge database a few times as he’s tried to perfect his workout routines. Since he’s so damn healthy, they’ve reduced the medications he needs to take. Dr. Ascher has pronounced him a model recipient and sends him people to mentor as recipients.

Since getting his health back, he has also:

But if we’re being real real, none of these things are as important as the fact that he is alive and he living his life.

He’s still with us. That’s all we wanted. That’s the best-case scenario.

What would we change?

I asked my cousin if there is anything he’d change about the transplant experience. He said,

“No, it was actually pretty smooth aside from the nearly dying part.”

Which reminds me, he had a surgeon (not from UCSF) who completely butchered his intestines and contributed to the issues that were causing him to bleed out and nearly die. In the month between our cancelled transplant and the actual transplant, Randy had to have a about 60 blood transfusions. That’s like two PER DAY.

When UCSF opened him up for the transplant, they saw what that other surgeon had done. They paused everything to document because they new it was bad. I honestly think that whack surgeon just figured Randy was a lost cause and going to die anyway. There were many things he could’ve done to prevent or reduce suffering and didn’t.

Of course, these weren’t necessarily things within our control. I think…yeah, we feel pretty good about the choices we made and what stemmed from that.

I anticipate writing another update for the 5 year mark. By then, maybe I’ll finally have whipped this body back into shape. By then, maybe COVID will be under control enough to allow my cousin and I to actually do an obstacle course race together! Who knows?!

Randy says he’ll take an abdominal scar update photo for year 5 as well. Maybe we’ll even take one side-by-side. Then after that, I may stop the yearly updates. I’ll always make myself available for people who have questions. I hope this series of blog posts will always be helpful for potential donors.